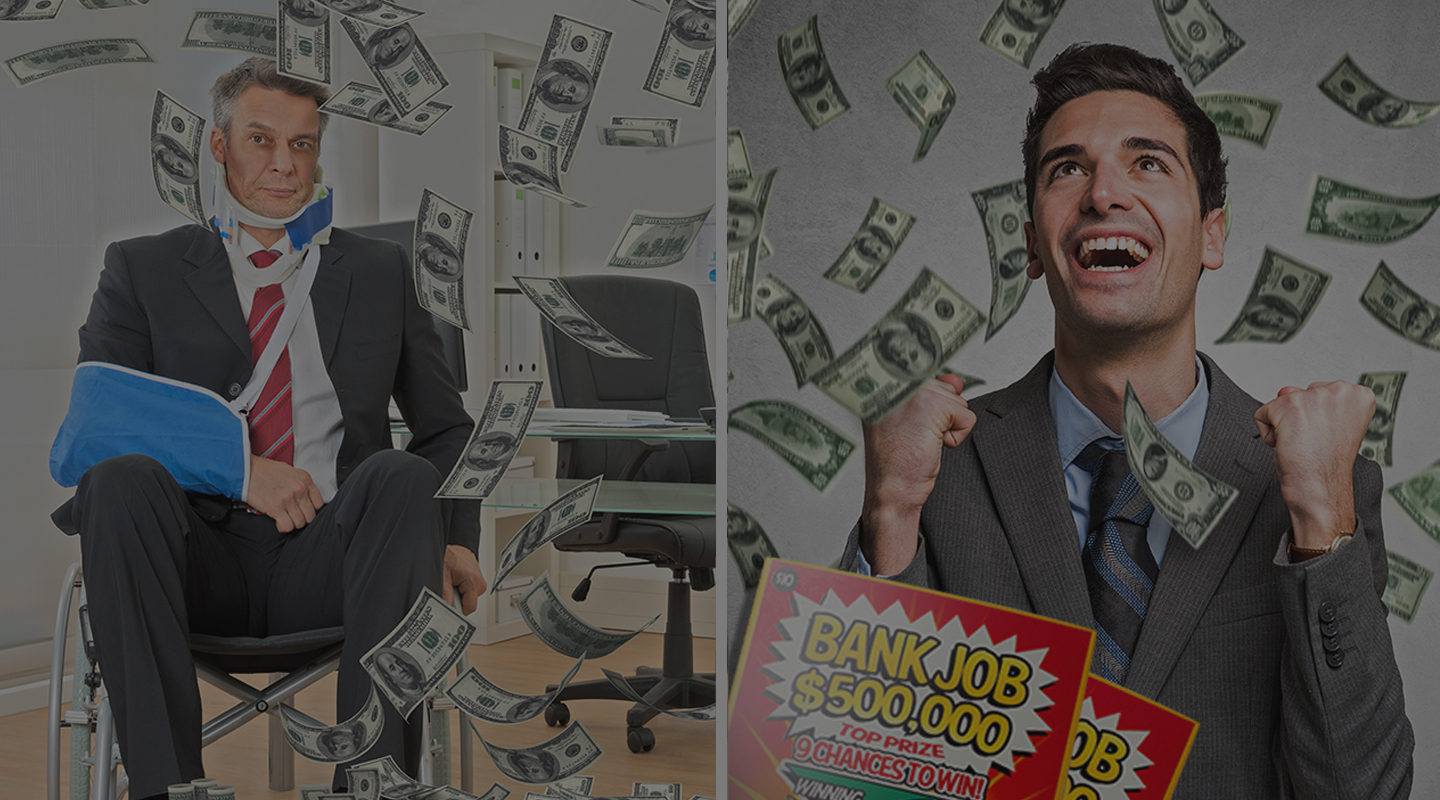 Whether someone comes into a large windfall of money from (1) a personal injury settlement or (2) winning the lottery, both instances force the individual to make a decision – should I take the money in a lump-sum or should I allow myself to get paid over a period of time via an annuity (Structured Settlement or regular)?

With articles like these: "20 Lottery Winners Who Lost Every Penny", "20 Lottery Winners Who Blew It All","The Dark Side Of Financial Windfalls" – that talk about the realities of losing everything from "sudden money" from the lottery, inheritances, or a settlement – it isn’t hard to believe that the decision discussed above is one that should not be taken lightly.

Let’s be clear that there are major differences between someone coming into a large windfall of money by means of the lottery vs. from a personal injury settlement. When it comes to the lottery, those winnings are fully taxable at the federal, state, and local levels. However, when it comes to a personal injury settlement – because of certain tax laws – the amount of money that an injured party would receive from their settlement is fully tax-free.

For the lottery winner (before considering the "human element"), they really must contemplate their decision (lump-sum or annuity) from the vantage point of tax-planning. The lottery winner must think about what tax rates look like today and what one will expect them to look like in the future. Individuals that expect the top tax rate to decrease over time, should take the annuity (all things being equal). However, those other individuals that think that the tax rate will increase over time, should take the lump-sum (all things being equal). In addition, we must not only consider the effects of federal taxation; one must think about state & local income tax laws as well. At the end of the day, the final amount that a lottery winner actually takes home after taxes is going to be substantially lower than the “winning” amount. However, there will be differences in end results of after-tax money based on tax-planning & opportunity costs.

Another layer of this decision process for the lottery winner stems from what to do with the money if they do indeed take a lump-sum. If they are rational, they would take some time to allot some of the after-tax lottery money to be used for themselves, spending, or other major (but not extravagant) purchases – so that they can ultimately let the rest of the money be invested & grow mostly untouched. They would invest that money with the hopes of realizing a return that would outperform the annuity option payout in the long-run.

The story above sounds great and we could only wish that all individuals would act rationally & prudently in this way. However, based on the articles shared above & how we know that most individuals do not act in rational ways – it just makes sense that there is the option of an annuity for lottery winners. This same reasoning rings true for the available option of Structured Settlements for personal injury plaintiffs. We may be somewhat biased, but our experience with personal injury clients & the reality of lottery winners has shown that, when it comes to sudden money (lottery, personal injury settlement award, inheritance, etc.) – it is almost always the case that a periodic payment schedule makes the most sense (whether that be a Structured Settlement or some variation of an annuity). The reason for this relates to the “human element” referenced above, which deals with irrational behavior, family dynamics, & other items that lead to the mismanagement of money.

First off, in most of these cases (personal injury settlement or lottery) – the individual that comes into money has never seen or been entrusted with such a large amount of money in their entire life. How could we expect them to know what to do with it, act rationally, and not spend it on extravagant purchases? A new home, car, etc. – those items add up, and if one does not consider the long-run cost/maintenance of those items, they may run out of money sooner than they think.

Second – even if they were more conservative or on the rational side of the spectrum, how can we monitor the influx of family, friends, co-workers, acquaintances, etc. that will be knocking on their door to borrow money, pay for their children’s education, invest in their new business, etc. It is not easy to say no to helping out family & friends, especially when you come into a large pot of money & there is this “unsaid expectation” that you are now a charity organization. Finally, when it comes to windfalls of money – we’ve seen instances where family or friends take the “recipient” to court on the grounds that they made an agreement that they would split the money. With this example, one can see how additional expenses and headaches can add up when considering outside influences.

The two items mentioned above can be associated with both lottery winnings & settlement awards from personal injury cases. However, this next point is more tied to settlement recipients from personal injury cases – and it has to do with the reality that future medical expenses are going to be accrued. Now, this all depends on the severity of one’s injury – but in those cases where going back to work is not a reality, major surgery is needed, and/or future medical needs are anticipated over one’s lifetime – we better hope that money is left over for those expenses. In these more catastrophic cases, it helps when life care planners, trustees, fiduciaries, & settlement planners are involved in a concerted effort. However, that is not always the case – and if the individual does not budget for future medical expenses, the efforts of the trial attorney in fighting for justice on behalf of the client are all for nothing.

When it comes to the injured party in a personal injury case, the end goal of the plaintiff attorney is to make their client whole again. That attorney is sticking up for the little guy and is ultimately seeking justice for someone that cannot do so on their own. Such a task takes a lot of time, resources, & effort – which does not go unnoticed. The plaintiff is grateful that someone has gone to bat for them, and the reality is that by having that accident & coming into a large windfall of money – their life will never be the same. We could not expect it to be. And because of that & everything mentioned above about irrational human beings, lottery winner behavior, the “human element”, family dynamics, & the mismanagement of money – we will continue to work relentlessly with our attorney clients & their plaintiffs on helping secure a life of wholeness after settlement.

If you have any questions, I would greatly appreciate the opportunity to provide my insight/experience. Please feel free to contact me here: Contact Manny Valdez & The Valdez Team

Whether someone comes into a large windfall of money from a personal injury settlement or winning the lottery, both instances force the individual to make a decision – lump-sum or periodic payments?

Critical Benefits of a Structured Settlement to the Injured Party

Structured Settlements are a great tool to help plaintiffs generate a periodic payment stream from their settlement award. Specific to personal injury plaintiffs, there are several benefits & advantages of choosing to structure one's settlement money.

In this article, we flush out exactly why attorneys are even allowed to defer their fees & discuss some of the important items to consider when moving forward with an Attorney Fee Structured Deferral.